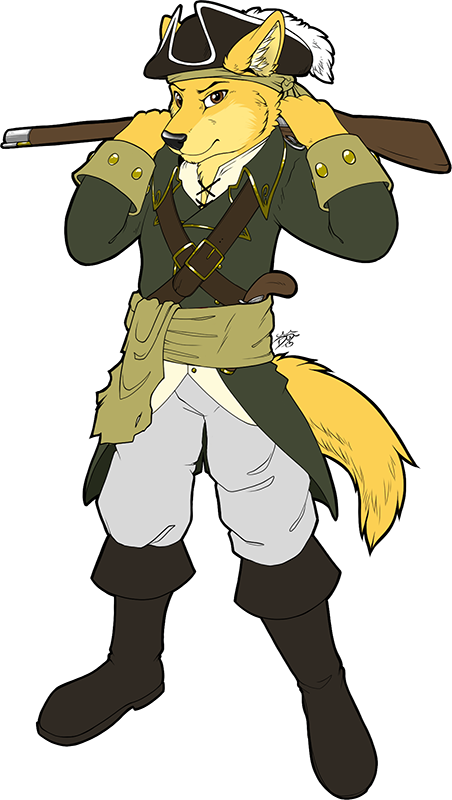 Sergeant Zeke Kenner was born in the Mercan Federation, a land in the new world rumored to have limitless opportunities. He was raised in the Mercan capital, Whitmore, and spent his youth visiting frontiersmen and the Tuskega tribe. As a child, he was quickly taught to build homes and hunt game effectively. By the age of 16, Zeke enlisted in the Mercan Army to set up defense in the frontier. A powerful and rogue colony, known as the Republic of Alomia, seceded from the Federation and declared independence in hopes to conquer the Old World. The Mercans led a pacifist cause for peace to avoid international conflict, but the pacifist leader’s assassination led to a civil war.

Because the Federation was significantly weakened by the little ice age and the bloody war, powerful empires took its chances to claim the Federation as its land of its rich resources of high grade steel. Zeke returned from the from the frontier and partially served in a cavalry division to provide defense on the other front, but failed. Knowing that the Federation was physically and politically destroyed, Zeke and his band of brothers went aboard the MFS Vanguard to change the world. He became part of the Marine force aboard the Vanguard where he performed island hopping amphibious assaults, raids, privateering, and sharpshooting from high masts. The remaining Federation Mercans became notorious to the world and were known as the “Sentinels of Liberty”. The Vanguard was defeated and Zeke was thrown overboard by the captain and his best friend to continue fighting for freedom…

The origin of the name “Zeke” is his shortened native name of “Sekaruhar”, which means “Spear Dagger” Zeke is about 21 years old and has a calm, stoic personality. He is quick to anger due to the stress of war, but gets over it quickly. He hardly smiles, but does not mean he cannot be happy. Once a soldier, always a soldier, Zeke will lay his life down for the sake of others and takes orders from superiors with no complaint nor hesitation. He is in a hunter or hunted scenario with a Alomian leader in attempt to acquire a mystical treasure believed to be a super weapon. Since then, Zeke thrives for liberty and justice for all. As a pirate, he is free from the world and in hiding from Alomia, carrying the heart of the Mercan Federation in him.