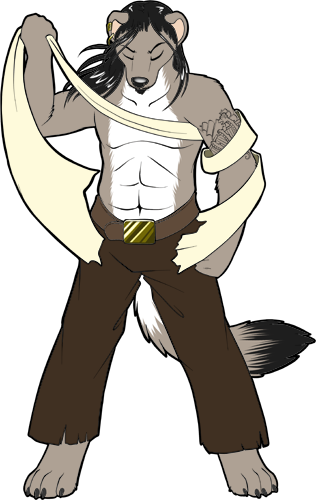 Rubian Santana
Species: Long-Tailed Weasel
Gender: Male
Eyes: Hazel
Hair: Black
Appearance: Brown fur, with light brown markings. He has a black tip on the tip of his tail. In the winter, his colors turns to whiter shades. He has medium long wavy hair, which he keeps brushed back or tied in a loose ponytail. He has a fair muscular build.
Clothes: Rubian only wears a shirt when the weather is too cold. He wears dark pants, held up with a heavy belt.
Strengths: Physical strength, sword fighting, swift.
Weaknesses: Love, superstition, firearms.
Weapons: Usually only carries two short cutlasses.

Rubian Santana is a strong and skilled member of Feralys. He is tall and lean with a firm build, and is always proactively performing hardy tasks around the ship to stay busy. Rubian speaks a mix of English and Spanish, which provides for his heavy accent, but soft-spoken characteristic. When finally taking a break, he enjoys playing guitar to entertain.

Rubian grew up in a poor village on Clayrock, where he lived with parents and many siblings. He was the second youngest of 12, so he was often overlooked. When older, he began training to become a village warrior.

He ventured out sometimes to rendezvous with a secret lover of Port Royale. She would exchange gold and treasures, which were in turn used to support Rubian’s family. Word caught on, and she was executed for stealing from Port Royale. Rubian was devastated, leaving home for good, on a journey to forgive himself for letting it get that far.

He happened to meet Reimina while wandering near a town in Zegi. He’d heard about the pirate princess before, but until they day he met her, he thought it was all legend. Rubian was captivated by her beauty, and would do anything to have her heart. Rei was in need of sailors, and Rubian was in need of a new life. He also took the opportunity to dedicate his life to protecting Rei.