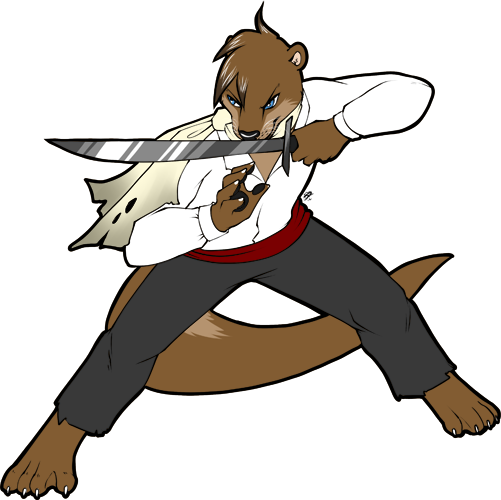 Species: Eurasian Otter
Gender: Male
Eyes: Blue
Hair: Short, dark brown when grown.
Appearance: Unusually tall for an otter, Eddy has the sturdy, thin build one would expect of a sailor. His thick, oily, dark brown fur has the usual markings of an otter, the dark brown becoming an almost creamy colour on his front. He of course has the long, rudder-like tail of otters, rather strong, he can easily send things flying if he’s not careful! Currently, his head fur is cut short, but tends to darken as it lengthens. His right ear is also pierced with a single gold ring.
Clothes: His choice of clothing is usually simple. Trousers-wise he usually favors pair of dark sailor’s trousers. Although he often goes topless, he more recently has taken to wearing a plain, linen shirt. His only slightly frivolous garment is a thick sash of red silk that he wears about his waist into this you will often see his pistol tucked. Finally, there is a battered cloth scarf that he wears almost everywhere, although it’s unclear where he got it, he believes that it brings him good luck!
Strengths:
Weakness:
Weapons: – Flintlock Musket – A great shot, the musket is by far his preferred weapon. Taken from a Naval store-room, his is a sturdy, long barreled weapon with a plain, reliable flintlock. – Flintlock Pistol – Acquired as a prize by Eddy, it has it’s flintlock on the left of the weapon, making it easier for him to fire left handed. – Cutlass – Eddy’s blade of choice is a sturdy, straight-bladed cutlass. It has a simple, practical hand guard made of blued steel and a single-edged blade of fine Anglish steel. It usually hangs in a scabbard secured in a leather baldric.

Before Eddy Dobhran had even began to walk, he had undertaken his first major sea voyage when his father, Robert ‘Rab’ Dobhran, fled the old world after participating in a failed coup against the king of United Briton, an affair the infant otter could barely remember, but perhaps, it was this that gave the otter his love of the sea.
They settled in Port Royal. It was in the narrow streets of the Warren and the seething activity of the Docklands that the young otter grew up, thriving on the stories of the sailors, travelers and merchants that passed through and playing amongst the bulky merchantmen, the exotic traders and the magnificent, sturdy battleships that lined the docks. As the old saying goes, Eddy was ‘born with salt in his veins’ and, at the age of 9, he enlisted as cabin boy aboard the merchantman Prometheus. All his father got was a note from the ship’s captain explaining the situation.

It was ten months before the Prometheus returned to Port Royal, and young Eddy’s reception home wasn’t warm. However, despite his father’s beatings, it wasn’t long before Eddy enlisted again, first aboard a Merchantman and even, for a time the Navy itself. The lad took well to the sea. He eagerly digested the skills of seamanship, and was soon rated to able seaman. It was the life he chose, time upon land became less and less for him as he took part in longer and longer voyages, even serving a a short period as Master’s Mate.
Despite his long periods at sea, Eddy did make an effort to keep in touch with his Father, whenever he was in Port Royal, he’d take up berth with him and occasionally, whenever he could find someone to write it for him, send letters home. Although rarely together, and even more rarely not arguing, the two did somehow maintain a healthy fondness for each other, Robert seeing his son as a wild, reckless young toe rag; Eddy seeing his father as a dull, boring old river mutt.

Eddy had just disembarked from HMS Lucifer, when an unknown ship appeared in the bay of Port Royal. Before the Navy or the Batteries could challenge the ship, she opened fire. Fast, efficient gunnery quickly disabled the few naval vessels afloat and began tearing holes in the town itself, boatloads of skilled pirates coming ashore, looting, burning and raping. Naturally, Eddy ran for home, sprinting unerringly down the labyrinth of the Warrens, only to see a side of his father he’d never seen. Robert Dobhran was facing the enemy, wielding the tarnished old Broadsword that had always hung above the fireplace with frightening skill and fury. Eventually however, the old otter was brought down with a musket ball.
The incident struck the young otter like a hammer blow. Although he’d never been close to his father, he realized how little he’d truly known him. The quiet, cheerful father Eddy known had been a mere shell of the man Robert Dobhran had been, and Eddy finally realized this. Nothing left to connect him to the port town, after setting his affairs in order, Eddy purchased a handy little cutter and set sail away from Port Royal, his father’s sword wrapped in sailcloth.

It wasn’t long before the young otter found himself in the inn known as ‘the Clam’s Pearl’, where he first came across Reimina Keishana and her rather motley crew. She claimed to be former Princess of Tischna and rightful heir to the royal line, which meant little to the otter. Keishana was however, also in command of the former frigate HMS Dosnmatta, now renamed Feralys. Finding himself swept along in the adventures, Eddy found himself quickly accepted as one of the crew, his skills and knowledge welcome aboard the rather ragtag vessel.

After the loss of the HMS Dosnmatta, a new ship was launched Feralys. Due to his being one of the few surviving hands with experience, Captain Keishana rated Eddy to the rank of Quartermaster of Feralys, where he can usually be found on deck, seeing her sails set for her next adventure.